“There can be few unpublished works that have already exerted such far-reaching effects upon twentieth-century social and intellectual history as Jung’s Red Book, or Liber Novus (New Book). Nominated by Jung to contain the nucleus of his later works, it has long been recognised as the key to comprehending their genesis. Yet aside from a few tantalising glimpses, it has remained unavailable for study.”

The birth of the Red Book

For Jung, the years between 1913 and 1921 were marked by psychological turmoil and intense creativity. He was experiencing a constant stream of fantasies and visions that he recorded in his Black Books (1913-16). He began to edit this material and to add commentaries with mantic pronouncements, which then became the text of Liber Novus (1914-18). Sometime in 1915 he started to transcribe Liber Novus onto the parchment sheets and then the folio pages that comprise The Red Book, employing medieval script, and embellishing the text with symbolic motifs and paintings. In addition to his on-going analytic work with patients, Jung continued to research and develop his ideas about typology, culminating in the publication of Psychological Types (1913-21). From 1914, he lectured and published articles developing the psychological concepts that emerged from his experiences with the unconscious, including the self, the new god-image, and the process of individuation.

The Way of What is to Come

In “The Way of What is to Come”, which Jung wrote in 1915 as the introduction to The Red Book, he informs us that he had discovered a spirit that rules the depths of everything contemporary, and which, “from time immemorial and for all the future possesses a greater power than the spirit of this time”.  As he was forced to experience between 1913-16, the spirit of the depths valued the irrational, the inexplicable and the paradoxical – “the last and simplest things” – over a contemporary rationalistic belief in science, which relied on explaining and ordering. Instead, it demanded that Jung “melt together sense and nonsense to produce the supreme meaning.”

The spirit of the depths informs Jung that he is an image of the unending world, and that all the last mysteries of becoming and passing live in him. It insisted that he speak “what is”: about the ridiculous, about sacrifice, about solitude. And in doing so, Jung discovered that his speech and words were imperfect: “out of the impossibility of finding those words, I speak in images”. The Red Book is Jung’s attempt to convey what he experienced in word and image, in the service of the spirit of the depths, and in his search to discover the changing God-image within man.

When he wrote the Epilogue to the Red Book in 1959, Jung concluded “I always knew that these experiences contained something precious, and therefore I knew of nothing better than to write them down in a ‘precious’, that is to say costly, book and to paint the images that emerged through reliving it all—as well as I could”. Thus, The Red Book invites its readers to discover their own Way by exploring and relating to the words and images it presents. These are Jung’s first intuitive responses to “the stream of lava, and the heat of its fires” that, as he asserted in Memories, Dreams, and Reflections (1963), had changed his life and provided the imagistic prima materia for all of his subsequent work. 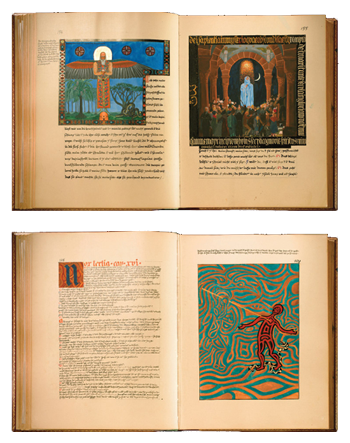